I am dedicated to solving the personal health crises and modern day disease epidemic by empowering more people to take back control over their health through making better food choices, which will not only influence their personal health but also that of our future generations and our planet. 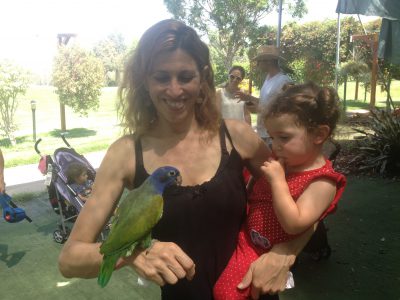 Get Your Free Health and Weight Loss Ebook Here:

Learn the 3 major mistakes smart people make that keep them from losing weight and how to easily avoid making the mistakes for good. 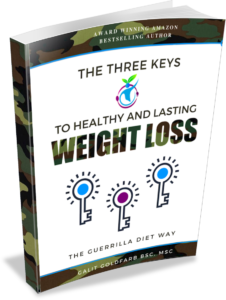 Nutritionist, Medical scientist, and Life Coach Galit Goldfarb was born on February 13, 1972, in Israel. Galit was raised in both the United States and in Israel.

Galit Goldfarb’s passion for personal development, health and helping others was always existent and helped her throughout her studies acquiring three university degrees, which later became a 22 year career in the field of medicine. Galit’s career started while she was searching for help to conquer the eating disorder bulimia she had been suffering from since the age of 16.  After a two-year military service as an officer instructor in Israel, Galit spent a year in Munich, Germany with her grandparents while studying German. At this time she married and later moved to London, UK, where she earned a BSc (honours) in Biochemistry & Nutrition and studied for a PgC in Immunology as well as many diplomas in Alternative medicine. Galit worked on many interesting research projects in top research laboratories including the Institute of Brain Chemistry and Human Nutrition and The Royal Free Hospital School of Medicine.

During her studies, her life took on a downward spiral with the birth of her eldest mentally handicapped daughter when she was 23 years old. One and a half years later her second handicapped daughter was born. Her marriage crumbled and she moved with her daughters to Israel. In order to help both her daughters and herself and to gain a better understanding of disease Galit went on to study Medical Science at the Sakler School Of Medicine at the University Of Tel Aviv where she earned an MSc with distinction in Medical Science. Galit later opened a private practice in the field of Nutritional Medicine to help clients lose weight and achieve health, and also worked as an Emergency Medical Technician for the Israeli Red Cross. During those years, Galit also delved into behavioural science to help herself and her clients succeed at changing self sabotaging and non beneficial behaviours. During this period she learned the power of mental attitude and how to control the mind in-order to achieve the attitude needed to succeed in life. Galit reshaped her life completely and became financially independent while also reaching her true potential in other fields of life as well, including conquering bulimia, becoming happy independent of outer conditions, becoming fulfilled by working on her life purpose, and being part of a great personal relationship.

Galit shares the knowledge she gained during this period of her life in an online training program titled “The Magic 8 Step Formula To Success & Happiness” and in a five book series titled: “The 6 Principle Strategy for Creating a Successful & Happy Life” which includes:

Book # 1: The Basics Everyone Needs to Know Book

Book# 2: How to Create Peace of Mind Book

Book# 5: How to Create Wealth

This book series was written to help  the reader, easily make the necessary changes to reach these goals by learning and gaining the tools to do so. The 5 Book series is available on Amazon.

After two and a half years of living an extremely happy and successful life on the average western world diet, Galit was diagnosed with cancer, after being operated on, less than a year later she was diagnosed with a another different cancer. By then she was a mother of 4 girls.

Following her operations, she was determined to heal herself naturally without radiation therapy. It was then that she began devoting her time to researching the ideal diet for human consumption, which supports health and longevity as well as a fit physique. By combining many scientific faculties together, she found the answer. This research along with Galit’s personal experience and her experience helping her clients with health and weight issues formed the basis of her Award Winning International Bestselling book titled: “The Guerrilla Diet and Lifestyle Program”. By following The Guerrilla diet & Lifestyle Program, Galit conquered cancer and effortlessly reached her optimal weight. Today she has plenty of energy to fulfil her dreams. Galit later transformed her book into an online training membership program called “The Guerrilla Diet Bootcamp” to help people reverse disease, achieve natural weight loss and regain their energy and vitality through a gradual, step-by-step, easy to follow lifestyle and mindset habit changing program. Galit also gave a TEDx talk on “The Ideal Diet For Humans”

Galit’s  mission is to empower people to take control over their health, weight and life while  spreading the word of the ideal diet for human consumption so that more people can live healthy, happy and fulfilling lives. Galit offers workshops, speaking engagements, online programs and personal coaching.

Galit currently lives at her beachfront home in Israel, with her husband of 14 years and her four daughters.